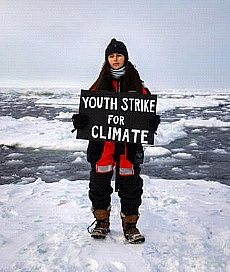 A recent email from Greenpeace reports on an unusual school strike for climate by Mya Rose Craig, a British-Bangladeshi 18-year-old ornithologist and nature, climate and equal rights campaigner, on 20 September 2020.

It also reports on other environmental issues, including how Greenpeace have been dumping large boulders on the Dogger Bank in an attempt to prevent illegal bottom trawling in what is supposed to be a Marine Protected Area, and gives a link to Sir David Attenborough's new documentary on extinction.

The email also notes that the UK Citizens' Assembly set up to discuss climate change - Climate Assembly UK - produced its report in September, and gives a summary of its comclusions with numerous links to related topics.  There was an online BBC News item, but The Guardian seems to have been the only mainstream newspaper to have thought this worthy of mention.

The assembly was set up by several Parliamentary committees and treated as a 'House of Commons project'.  Extinction Rebellion, which campaigned for the setting up of an assembly, gave a cautious welcome to the report, with reservations about the 'insufficient publicity given to the Assembly by the government and by the press' and restrictions placed by Parliament on the scope of their discussions and on advice given to the assembly by expert witnesses.

The relative non-independence of the Assembly and the rather bland nature of its recommendations seem likely to ensure that it will have little effectin modifying the hugely inadequate climate policy of the UK government.