In response to a Freedom of Information request to Transport Scotland we have learned that the fee paid to WSP Consultants for carrying out the 'Case for Change' study reported on below was  £48,646.68.

However, the situation with regard to the FoI request is not quite straightforward.  The original response stated that as the information we were requesting was environmental information, Transport Scotland proposed to use an exemption at section 39 of the Freedom of Information (Scotland) Act 2002 to enable them to respond to our request under the Environmental Information (Scotland) Regulations 2004 instead of under the FOISA.  The information requested (the consultants' fee), was then declared to be exempt information under section 10(5)(e) of the EIRs on the grounds that  'disclosure of this particular information would, or would be likely to, prejudice substantially the confidentiality of commercial information provided by WSP and thus cause substantial harm to their commercial interests.'

We were given the option to request a review of this decision, and challenged it on the grounds that the information we were requesting was not environmental information in terms of the official definition, and that our request should therefore be considered under the FOISA and not under the EIRs.  In a revised response Transport Scotland have agreed that that is the correct procedure, and as, surprisingly, the consultants' fee does not appear to be exempt information under the FOISA, the amount of the fee has been revealed.

The whole performance could be summarised as a rather underhand attempt to avoid providing information on the spending of public money which the public are surely entitled to know.

Concern has been expressed in recent months about hazards and the potential for serious accidents at the junction between the A9 dual carriageway and the B9161 road to Munlochy, usually referred to as 'the Munlochy junction'.  Consultation took place last year between Transport Scotland officials and representatives of local 'stakeholder' organisations including Police Scotland, Bear Scotland, MSPs, Highland Council, Highland and Community councillors etc.

What is called a 'Case for Change' study has now been carried out by consultants for Transport Scotland, and a 284 page report published which concludes nothing except that there is a case for change, and presents a 'long list' of 40 options ranging from painting the kerbs at the junction with fluorescent paint to creating a completely new road from some point along the B9161 to the North Kessock junction.

Don't expect action any time soon.  Under 'Conclusions and next steps' the report states
'This Initial Appraisal: Case for Change report has set out the context for the appraisal of the A9 section between the North Kessock junction and the Tore Roundabout and the intermediate junctions.'

What happens next?
'If the study proceeds beyond the Case for Change, the next stage would be the preliminary appraisal.'

And then?
'Following the Preliminary Appraisal, if funding is available, a more detailed appraisal may be carried out . .'

And after all that, and with who knows how many hundreds of thousands of pounds of public money in the consultants' pockets, perhaps in four or five years time we'll get the kerbs at the junction painted with fluorescent paint.

The names of the representatives of the 'stakeholder' organisations who took part in the consultation have been redacted. (Appendix J).

There are some interesting photographs in Appendix I.

'Conclusions and Next Steps'  extract from report 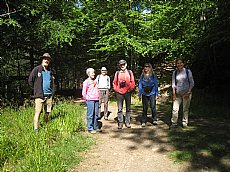