Exhibiting at the BIHS Show – taking the first steps

Have you ever been to a show like the Black Isle Horticultural Society’s Summer Show, and thought  "I’ve got better raspberries/ tatties/ marigolds/ lemon curd than these!"?  This can encourage you to think about entering the show next year, but sometimes taking the next step can be a bit confusing. Why are these four tomatoes better than those four? How do you present things at the show? Why are there size limits for some things?  And most baffling of all, why can I only present my raspberry jam in a jar with a waxed disc and a clear cover, not any other kind of lid? I won’t try to answer all the questions that arise, but here are a few examples and explanations that will hopefully show that exhibiting isn’t as difficult as it might appear.

Entries are judged on a range of attributes. As well as size (and remember there are maximum sizes in some cases), maturity (not under- or over-ripe), quality, freshness, lack of blemishes or damage, and uniformity are important. So, three small potatoes all of the same size will score more highly than two large potatoes and one small one. Three smaller Antirrhinums of good quality will be judged as better than three larger ones with marked petals. Six pods of peas that have ripe, full-sized peas inside will be marked higher than six larger pods that have small unripe peas inside.

What does it mean and what’s it for?

Some classes in a show can have rules that may be a bit confusing. In the BIHS show, Class 53 is for 12 Raspberries, complete with stalks. What this means is that the fruits should be cut from the plant, with a short length (at least 1 cm) of stalk still attached, with snips or scissors, rather than pulled off the plant leaving the white hull behind, as you would normally do for eating. This may seem inexplicable at first, but there are good reasons for it. Leaving the hull in keeps the fruit fresher and of good shape, and the stalk gives you something to hold the fruit by so you’re less likely to damage it. (It also shows that it’s likely to be something you’ve grown yourself rather than bought in a shop, which is of course not allowed!)

Some rules are there for very practical reasons. Having a maximum size for photographic entries is partly to make the competition more equal, but it’s also to ensure that we have enough room to display all the entries. And the reason for only allowing clear covers on jam jars is so that the judges don’t have to wrestle with tightly closed metal lids and end up covering themselves in a cocktail of jams and jellies.

Our show isn’t all about giant onions and perfect dahlias, although we have those too. Most of our exhibitors are ordinary gardeners with ordinary gardens, and we’re keen to encourage more people to take part. Above are just a few examples that hopefully help to explain some of the basics of showing, but one of the best ways of finding out is to speak to other exhibitors or members of our committee. You’ll find that people are very helpful and want to encourage others. If you have any questions I’ll be happy to try to answer them - email BIHS1955@gmail.com - and there's more about the show below.

to be held on 14th August 2021 in the Food and Craft Hall at the Black Isle Showground at Muir of Ord, is a local, friendly and (slightly) competitive show of produce by mainly Black Isle growers.  Although competitive most entrants are average gardeners and allotment holders and there are also classes for children and for novices.  You don’t need to grow ‘special’ veg for the show just reasonably good home grown, and there are also classes for fruit, flowers, house plants, baking, preserves, crafts and photography.  Here’s a link to the show schedule to have a look - BIHS Show Schedule – and do watch The Beechgrove Garden for timely hints not only for showing but for all your gardening.

You could also look at what the RHS says about growing for showing. 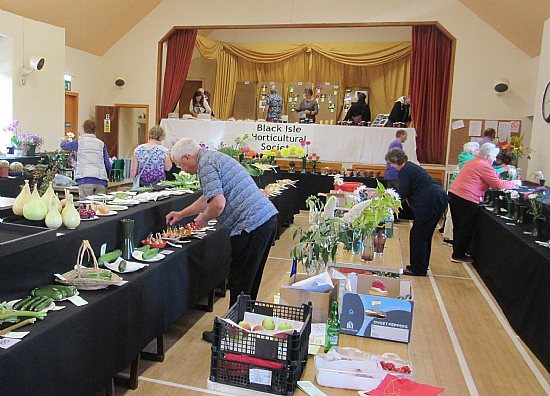 Setting up at the BIHS Summer Show