Highland Environment Forum has raised the alarm about the introduction of a UK bill to repeal much of the EU law and regulation retained in UK law after Brexit.

There is particular concern over legislation covering areas such as food standards, environment and wildlife protection and animal welfare regulation.

RSPB Scotland is running a campaign to get people to write to their MSPs, but the Scottish Constitution Secretary Angus Robertson has already written to Jacob Rees-Mogg, protesting in strong terms against the introduction of the bill.

From Rhetoric to Reality revisited: a new report

In 2011, LINK published our first Rhetoric to Reality assessment. In it, we commissioned an independent consultant to assess 8 key areas of environmental policy on how far reality on the ground had matched the rhetoric of policy. Now, ten years on, we’ve commissioned another assessment. A decadal review seems timely: it covers the life span of two Parliaments, we’re at the start of the UN Decade of Ecosystem Restoration and we have a new Parliament with the Greens holding ministerial portfolios, the first time ever in UK politics. The Bute House Agreement is bringing environmental legislation to the fore and giving impetus to Scotland’s’ leadership on climate and nature.

We posted an item a year ago reporting Scottish environment charities welcoming the Scottish Government's announcement of  'a vision and outcomes for an environment strategy'  on 25 February 2020, and feel that a year on it is time to redirect attention to this important and detailed document.

- one from Part 4   Environment Strategy outcomes (they mean objectives): how will we get there?  which is straightforward and sensible, if not much more than a statement of the obvious

Outcome: We are responsible global citizens with a sustainable international footprint
If everyone on Earth consumed resources as we do in Scotland, we would need three planets. Our consumption relies on resources extracted or used in other parts of the world, including water, land and biological and mineral resources. We have a significant carbon footprint, including emissions produced in Scotland, and emissions in other countries making goods which we import. As a result, our environmental impact extends far beyond our own country. The nature of this impact is complex. Some of the commodities we import are associated with deforestation, water stress and other ecological pressures in different parts of the world.

To turn our vision into reality, we will develop pathways for outcomes. These will identify strategic priorities and opportunities, working with existing strategies and plans across government. We will seek to direct our collective efforts in the areas that will have the greatest impact on multiple outcomes.[36] Work will focus, in particular, on opportunities to strengthen connections between policies. We will keep these pathways under review, ensuring that implementation of our Environment Strategy is flexible and dynamic.

Read it and see what you think 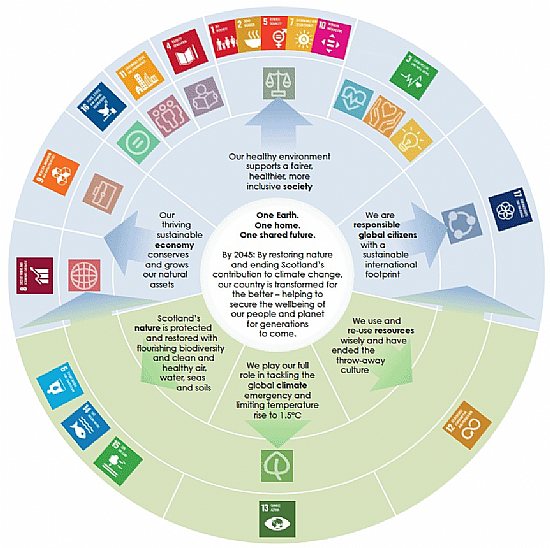 This is the view of environment campaign group Fight for Scotland's Nature, following the publication of the UK Withdrawal from the European Union (Continuity) (Scotland) Bill  in June.

They complain that the ability of organisations or individuals to raise formal complaints against specific examples of environmental damage will be diminished; that the watchdog body Environment Standards Scotland to be set up under the bill will not be sufficiently independent of government; and that there is no requirement for Scottish environmental standards to keep pace with possible changes in EU regulation, and no specific provision to prevent standards being rolled back.

Background to and details of the bill

Committee's concern about bringing back powers from EU

In a report published today, Holyrood’s Environment, Climate Change and Land Reform Committee calls for powers which fall within devolved competence, including environment policy, to return to the Scottish Parliament on EU exit day.

The report, which details the committee’s consideration of the legislative consent memorandum (LCM) for the UK Environment Bill*, specifically queries why environmental powers in devolved competence should be made via UK, as opposed to Scottish, primary legislation.

The committee believes that the Bill as it stands would allow the Scottish Parliament limited scope to influence decisions on devolved policy, to scrutinise relevant legislation and its implementation and therefore, effectively hold Scottish Ministers to account.

11 actions for the planet during a pandemic
11 environmental books to read right now
and  Act on Climate Change .

Scotland’s leading environment charities have welcomed the Scottish Government’s announcement today of a vision and outcomes for an environment strategy, applauding the government’s commitment to restore nature and end Scotland’s contribution to climate change.

They have called on the government to back up this commitment with legally binding targets for nature recovery and an action plan for delivery.

The charities, members of Scottish Environment LINK, also welcomed the announcement of a new environment watchdog to oversee compliance with environmental law, but cautioned that the new body must have real independence and power to protect Scotland’s iconic nature.

Proposals for an environment Bill originally introduced in the UK parliament in 2018 and included in the recent Queen's speech include the creation of an Office for Environmental Protection.  This would be  "a new world leading independent regulator .  .  . to scrutinise environmental policy and law, investigate complaints and take enforcement action."

But since the Bill was introduced, fears have been voiced that environmental protection will be weakened as a result of Brexit, and doubts expressed by environmenal groups and mainstream journalists about the likely effectiveness of the proposed legislation, and the independence and powers of the new regulator.

Covid-19 - Local and national information   Regular statements about Covid-19 from the First Minister and the Scottish government have been... More >>
Highland Council 'Have your Say' consultation results This consultation was introduced by Highland Council on 2 August The Highland Council has launched a c... More >>
20 Minute Neighbourhoods in the Highlands and Islands We would have expected any text like this as the subject of an event or article to be followed by a question m... More >>