TBI director Julian Paren has been working hard supervising the preparation of the new map, which is now printed and ready for distribution.  Julian has prepared the information below, and also written an article  Lockdown, walking and a new map  about the joys of walking locally and discovering new paths,

The Black Isle by foot, bike, bus and train

An updated Third Edition of the fantastic green travel map of the Black Isle originally produced by Helen Stirling for the Million Miles project has been published.  It is available from the usual outlets and costs 50p. The map’s title is The Black Isle by foot, bike, bus and train – the perfect map to help the smarter traveller explore the Black Isle.

The Black Isle Travel Map is a double-sided A2 folded map in A5 format and features:

What’s New for the Third Edition

How you can help to keep the map up-to-date

A number of the off-road cycle routes and footpaths on the Black Isle have been visited by TBI members in order to ensure the accuracy of the information on the map at the time of this printing.  However conditions do change.  Could all users of the map please e-mail info@transitionblackisle.org  should they find routes and paths that are no longer viable.

Feedback from users on the state of paths and tracks or access issues, or the discovery of useful paths “missing” from the map will be posted in this section.  This will be valuable when the time comes to prepare a Fourth Edition in due course.

You can view the main map and village plans online, and zoom in and move around to see the details.

The map is available across the Black Isle at 50p, or may be obtained by post with a small additional charge for postage by emailing  julian.paren@gmail.com . 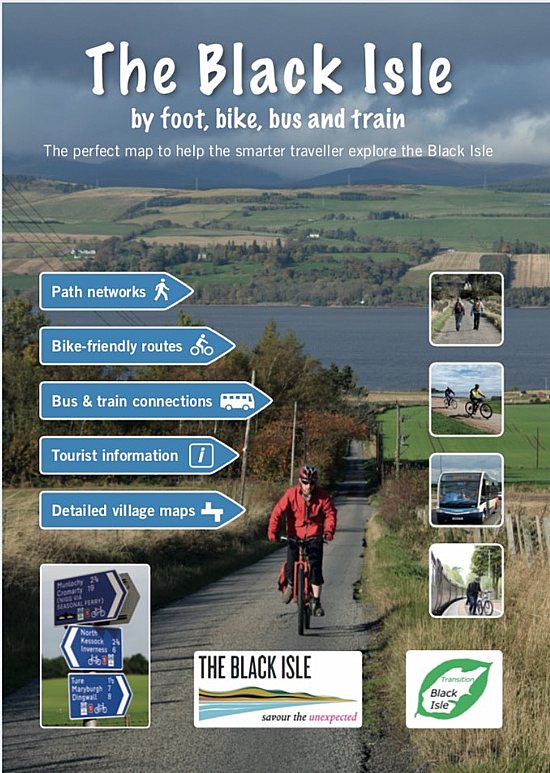