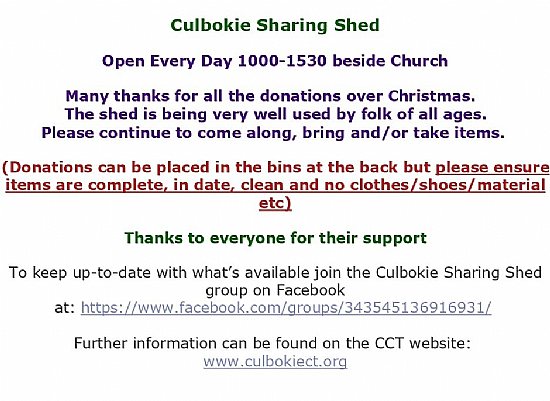 The NK larder seems to be well established now and well used with quite a lot of Christmas provisions and school uniform being donated. The involvement of the new shop owners has made a big difference in how much food we are preventing from going to waste. 4 big bags of mainly bread this week.

The fridge has been really useful for keeping perishables that bit longer and meant we were able to accept donations of smoked fish from the fish van at the market.

Water Butt
This and the guttering was donated and is now in place with a stand and tap purchased but the Church is not keen on this so we are looking for a plumber to connect the guttering directly to the drain.

Tool Library/ shed
Iain came up with the idea of a tool shed for the suggested tool library The church board seemed unclear about the point of a tool library. This was clarified but they are not happy for it to go ahead. A bike pump was the only thing that was placed in the larder and this has gone.

Power for Fridge
The open socket was apparently spotted being used by someone for charging phones and there was a concern that this would in some way be a problem with the Church’s insurance. A notice was put on the fridge saying it would be closed and a message put on facebook to suggest people use up what was there. The board suggested a lockable cover for the double socket. The church has now fitted a more robust single socket which was switched on on 17.11.21.

CCTV
CCTV has been suggested by the church. RANK board has expressed concerns about this as that was one of the reasons we weren't sure about other sites.  The solar sensor light has broken but there are 3 others available and one will be fitted.

Things outside the larder
The church wanted things confined to the larder itself so the donation box outside and last pot of tree seedlings was removed. It was explained that things like plant swapping and a possible tool library were part of a strategy normalising and de-stigmatising it.

There was correspondence and discussion about the bedding roll which was left outside. The owner seemed to have moved on so this has been removed.

Fruit trees
The Church does want to accept the offer of fruit trees so other sites in the village are being explored.

Costcutter
The shop is now under new ownership and RANK have transferred money from the ward discretionary fund grant to the new bank account so that volunteers can continue to pick up provisions on a weekly basis to top up that provided by fareshare and local donations. The new owners are also very keen to donate short shelf life provisions directly and have already done this.

Council Fareshare delivery
A new delivery was received on 5th October and is gradually being transferred to the larder.

Eggs and veg box
continue to be delivered, covered by a donation.

Recycling soft plastic and blister packs
A lot of the food from the council comes wrapped in soft plastic. This is collected as supermarkets now recycle it. A bin was put in the larder for volunteers to use and made available to the public, as was a small cardboard box for blister packs but the church is not happy with this and asked for this to stop.

CROMARTY
By Townlands Barn and will be open 24/7

Covid-19 - Local and national information   Regular statements about Covid-19 from the First Minister and the Scottish government have been... More >>
Fracking ban in England lifted The UK Government has lifted the ban on Fracking in England which has been in force since 2019.  The ban ... More >>