Good weather contributed to a very successful day for the Clean-up of the area of the Clootie Well at Munlochy on Saturday 26 October.  Over the years cloots have been tied to trees far from the well itself and the prevalence of modern oil-derived fabrics has led to the area becoming progressively less appealing as a site to visit.  The concept of the spirits curing people’s ailments as the cloots disintegrated has become forgotten.

Forestry and Land Scotland organised the clean-up day to restrict the area of Littleburn Wood festooned by cloots.  A tape was set around the central area of the well and thirty-plus volunteers spent four hours collecting over 50 large sacks of material from the region outside the tape. Collected were shoe laces, shoes, boots, underwear, tights, pinafores, scarves, dish cloths, J-cloths, polythene bags, gloves, socks, tape, ribbons, T-shirts, jeans, handkerchiefs, hessian, sweaters, gloves, polythene sheeting… and more.  The objectives of the day were met. All the sacks brought were filled. Just a few cloots high in the trees could not be reached as no ladders were available.  Importantly, a decision is needed on what the fate should be of the non-biodegradeable materials at the heart of the well.

At the day’s end a spiritualist was at hand to reinvigorate those who might have felt they were anatagonising the gods of the well, and most agreed that the transformation of the area around the well had been remarkable and achieved quickly.  Thank you Marie and the Forestry and Land Scotland team that organised the event with food and drinks and all the necessary tools, and thanks to the volunteers who came from the Black Isle, Easter Ross and as far away as Edinburgh.

Now, please visit the Clootie Well, bring some scissors and a refuse bag and hunt out plastic cloots and clothing for removal, so that only natural fibres are left to degrade in the way the spirits of the well require! 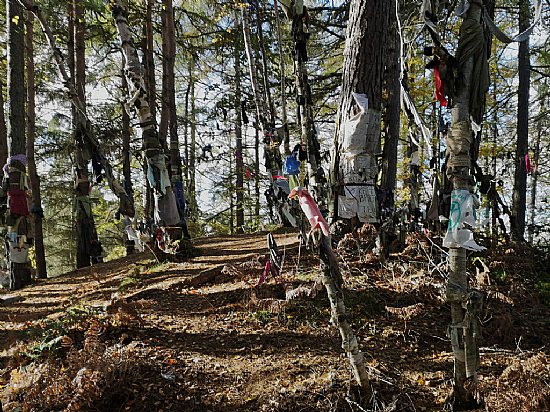 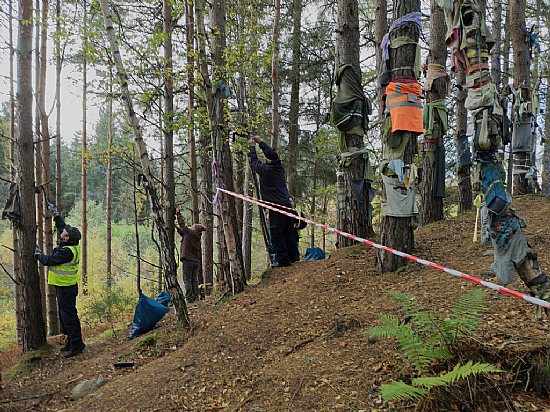 On 28 November Highland Council North Planning committee approved an application for three warehouse/office buildings on the same site as (behind the salt depot at Greenhill), and nearly identical to, an earlier application withdrawn in March 2017, as noted below.  The application reference is 17/01611/FUL, and the decision notice was published on 5 December.  The applicant is Mr J Maclean, of Linnie House, Kilearnan,
Muir Of Ord, IV6 7RY,  trading as Maclean Properties Ltd.

The original application, reference  16/04406/FUL, was withdrawn on 24 March and the new applicationwas lodged on 6 April, just a fortnight later.  The only differences are that the new application includes an additional use class 5, relating to industrial use not appropriate to a residential area; and the new plan shows the area of the larger site which is not the subject of either application as blank and labelled "outwith development site", whereas the plan with the original application showed it as filled with a number of warehouse or other buildings.  This seems to relate to an 'in principle' application for "Formation of business park including erection of 15 units (Classes 4 & 6)"  reference 16/04130/PIP, which was lodged on 10 September 2016 and withdrawn on 28 September, the date on which the first application for the reduced scheme with three units, 16/04406/FUL, was lodged.  The application for 15 units was mentioned as a 'related case' on the eplanning website page for both subsequent applications, but details of it were not made available to the public despite a request from the case officer.

The Planning Department Case Officer for both applications is Graham Sharp, who is based in Portree,  and can be contacted on  01478 613808.

Planning application  16/04406/FUL,  for the erection of three warehouse/office buildings and formation of access road, on land 100M west of the Greenhill Salt Store at Tore (see below), has been withdrawn.  This of course does not exclude the possibility of another application being made for the same site.

We would like to think that following the withdrawal of this application Highland Council will take action to end the current unauthorised use of the site for the storage of containers, and require the restoration of the site from its present derelict state.

We have recently become aware of two development proposals and planning applications at the inland end of the Black Isle - one for the installation of 30 shipping containers, to be used as a self-storage facility, at Corntown Steading, and one for the erection of three large warehouse/office buildings with access road behind the Greenhill salt depot up the A835 from Tore.  This proposal implies the prospect of more similar development on the same site, shown on the location plan but not included in the current planning application, and the clear felling of most of the remaining part of Mullans Wood west of the A835.

Both applications raise concerns about their likely affects on the local environment, particularly through the generation of traffic on unsuitable roads, and arguments for and against the Greenhill 'Business Estate' proposal in particular are complicated by the current derelict condition of the site.

Pictures of the Greenhill site by Jim Farquhar

The two faces of forestry - landscape and industry

Julian Paren has taken these pictures before and after clear felling at Bellton Wood near Munlochy. 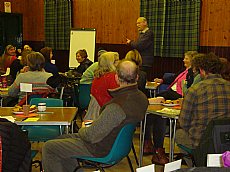 Successful Gardeners' Quiz Time evening It is reported that once people turned up and the teams were formed and named (see the score sheet), last Frid... More >>
Trump and Greta at Davos Donald Trump and Greta Thunberg are attending the current meeting of the World Economic Forum at Davos, a... More >>
Extinction Rebellion on Trial In the London Review of Books blog on 16 January, Lorna Scott Fox writes about the trials of Extinction Rebell... More >>