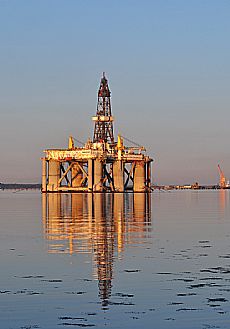 Our way of life is largely powered by fossil fuels like oil and supplies are being used up fast. Many experts believe oil production has already peaked. What is certain is reserves are finite. With demand increasing worldwide and oil becoming ever scarcer, prices are beginning to soar sky high.

This cheap, miracle fuel created millions of years ago, feeds the ever-growing industrial economy that we take for granted. Other nations in the world are keen to catch up and live the way we do. China and India use increasing amounts of fossil fuel to supply us with cheap goods, which ultimately end up in landfill.

Planning our descent from a high-powered, excessive economy to one living within its means will make the tumble from the peak less painful.

The livelihoods of many people in the Highlands are, directly or indirectly, bound up in the offshore energy industry. The expertise and skills amassed over the decades of working in the hostile environment of the North Sea will be invaluable as Scotland strives to become a world leader in renewable energy.

At local level, getting smart about energy use, insulation, and micro generation of energy from wind, water and sun is going to be vital in buffering our communities from the inevitable price rises.

Heating homes and fueling transport are two obvious areas where peak oil will have a serious impact. But its effects will be much further reaching. Food, medicines, fertilisers, plastics, cosmetics; oil is involved in the production and transportation of most of the everyday goods and services we take for granted.

Raising awareness of peak oil and taking action to increase communities' resilience in the face of the dramatic lifestyle changes it will bring is at the heart of the work of Transition Black Isle.

Rural Communities Bill consultation closes 31 January Gail Ross MSP is seeking your views on the Proposed Remote Rural Communities (Scotland) Bill which proposes en... More >>
Trump and Greta at Davos Donald Trump and Greta Thunberg are attending the current meeting of the World Economic Forum at Davos, a... More >>
Extinction Rebellion on Trial In the London Review of Books blog on 16 January, Lorna Scott Fox writes about the trials of Extinction Rebell... More >>