Electric Vehicles - Right for You? TBI Zoom presentation and discussion

'Driving Scotland To An Electric Future'

Alister Hamilton, Chair of the Electric Vehicle Association (EVA) of Scotland, gave a formal Zoom presentation to TBI members on 16 June 2020 on the topic 'Driving Scotland to an Electric Future'.  Alister was no stranger having a few years ago talked to TBI personally on the demise of the oil industry using thermodynamic arguments to prove the end of oil was far sooner than most would have wished to admit.  So quite naturally for him, pure electric vehicles were the only future-proofed investment for personal travel.  He spoke from the experience of someone who had owned a secondhand Nissan Leaf for seven years.

The talk covered the schemes in place in Scotland to offset the price of buying a new EV including grants and interest-free loans, the choice of models available now or on stream, (including their efficiency and potential range between charges) battery technology, charging equipment at home, and the support through mobile phone apps for identifying in real time the location, type and possible delay in accessing fast charge points when travelling. Alister also outlined the tariff available through Octopus Energy called Ohme which in conjunction with a Smart Meter could provide (in the dead of night) electricity at 0.04p per kWh or less!..  As Chairman of EVA Scotland he also outlined the role of the Association and the benefits of membership even if an electric vehicle was only a dream.

Around an hour of discussion followed the one hour talk.  Some participants reflected on their own experiences with electric cars, and others with more limited driving requirements questioned whether EV could make any financial sense when compared with a far cheaper petrol alternative.  There was plenty for everybody in the talk and discussion.  What was abundantly clear from the evening was that the car manufacturers have very ambitious plans to expand EV production and the future would indeed seem to be electric.

Thank you Anne Thomas for arranging the evening event. 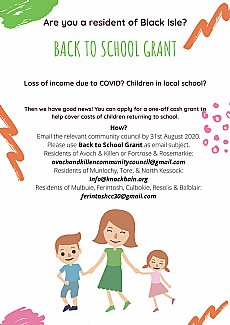 Back to School Grant Bruce Morrison, Secretary of Ferintosh Community Council has forwarded an important poster for parents of... More >>